This article is part of the Montañas Vacías series. A story about three friends getting reunited for a bikepacking trip over the summer. Read the previous one here: https://quaero.world/rides/montanas-vacias-day-4/

Fresh air and a rising sun gently woke me up in the morning. Our camping spot by the lake proved to be a great location and it was so far (at least for me), the first real night on this journey. Although a little bit of rain had me setup the tarp late in the evening, the temperature had finally dropped to bearable levels. I crawled out of my bivy bag and saw our new friend, Jose Alberto who had setup camp with us in the middle of the night, shivering on his mattress. He hadn’t anticipated the fact that temperatures could drop to as low as 5ºC and had only brought a sleeping bag cover without insulation. Though he didn’t seem too bothered and told me he’d warm himself up during the day.

I had just finished talking with Jose Alberto when I saw Mathis' head peaking out of the tent. Then, in a matter of seconds, he got out and immediately jumped into the lake. He fancied a quick morning swim and apparently the water was still super warm! He insisted on how good it was so I took my chances and followed him. He was right, it felt like taking a hot bath with the added benefit of a stunning location. While Jose Alberto and Antoine were packing their stuff up, we were enjoying our morning swim.

The day before, we had asked a small restaurant in the nearest town to spare a few tostadas for our breakfast. We broke camp and retraced our steps back to the establishment. However, we should have learned from our previous experiences because once we got there, the bartender told us he had nothing left for us. No bread, no ham, just ice cream, beer and coffee. We looked around and realized we were surrounded by construction workers who had ordered sandwiches and whiskey, hence the shortage. Just like after our rave party, we resorted to eating ice cream and some madeleines Mathis had bought the day before.

Jose Alberto then asked us if we had had the chance to explore and taste the local cuisine. The three of us laughed and thought it was a joke because we had only eaten patatas, jamón and tostadas since we had left Teruel. He then went in the bar and came back with a “local coffee”. The tall glass contained three large ice cubes with what looked like coffee. I thought they had “invented” iced coffee and was the first to taste the new beverage. I took a large sip and quickly realized it wasn’t only coffee, it was Pastis mixed with coffee! What a way to start the day! Jose Alberto then went on to explain that it was made by mixing a third of Pastis with two thirds of coffee. That taste would stay in my mouth for the rest of the morning. No one wanted to finish it, so Jose Alberto chugged it all at once like it was regular coffee.

After this improvised and weird “local” breakfast, we headed towards a fountain to fill our bottles for the day. In fact, lying ahead of us were 90km of untouched nature without any options to satisfy our hunger or thirst. Then, we headed for Santa María del Val, the last village before the heart of the Spanish lapland.

Jose Alberto had similar plans, so we decided to ride together for the day. However, the road immediately steepened just a few kilometers into the route. We reached the top and waited twenty minutes for our new friend to arrive. The idea of riding together seemed like a lot of fun but we had forgotten a detail: we were not progressing at the same rate. We concluded it was best if we parted ways after the descent leading to Santa María del Val.

To our surprise, a bar was open in the small village. We went in and were welcomed by a lovely woman who unfortunately didn’t have anything for us to eat. At this point, Jose Alberto who hadn’t eaten much the day before decided he was going to negotiate some fried eggs. It was already well past 11am and since we had the same destination, Beamud, we decided to leave Jose Alberto. We told him it’d be quite simple to spot us, he would just have to look for a bar serving beer or people having a shower in the central fountain.

Right before leaving, Jose Alberto asked us: “Could you draw directions in the sand when the route turns?”. We were astounded by his question! He explained that he didn’t have a map of the route, only the villages’ names and rough screenshots of specific turns. He was clearly on another adventure level! Still baffled by this information, we assured him we would do our best to leave marks at each turn. Although we didn’t have any service, we also exchanged numbers and left the village.

Our printed guide indicated a series of long climbs to reach the top of the Serranía de Cuenca. Once again, the route didn’t leave us with much rest and we soon found ourselves pushing our bikes up a steep gravel road. A few moments later, Mathis got a flat that reminded us of our first days on the route. However, since dropping our goals, these though moments didn’t matter and we just kept pushing on, one kilometer after the other.

At each turn, we would also stop and draw arrows in the sand indicating the right direction for Jose Alberto. After riding through a dense pine forest, we reached a seemingly endless plain, where the simple yet comforting sight of an eagle distracted us from a constant isolation.

Under the scorching sun, our minds were focused on managing our thirst and water reserves. We still had a long way to go before Beamud. The path ahead started descending and turned into a magic gravel road, of which the region seemed to abound. It was also strewn with ruins, reminding us of the region’s pastoral past. On several occasions we encountered cows blocking the path like guardians of the land. A land they had learned to conquer and adapt to over centuries. A few distractions later, we started the last climb towards the highest point in the Serranía de Cuenca.

At the top, we were surrounded by pine trees and weren’t rewarded with views. We pressed on and quickly, the path transitioned to a smooth paved road. Like euphoric kids, we went as fast a we could throughout the whole descent. Suddenly, the trees cleared up and we could see miles ahead. Once we reached the bottom of the valley, we were sadly standing in front of an almost dry river bed. It was 5pm and we decided to rest for a bit under the shade and enjoy some of the delicacies/ leftovers we had in our bags: madeleines and bread with ketchup from days ago. It didn’t matter, we were only a few kilometers away from Beamud and were already dreaming of an ice cold pint.

After this “banquet”, we resumed our way towards our final destination. The road was paved all the way and half and hour later we reach the promised village. Except, for the first time, Ernesto’s note were wrong and the village’s bar / restaurant didn’t exist anymore. We asked a few locals that confirmed our fears and told us it was another 10km or so until the next village, Valdemoro, where we could eat and drink. I checked my phone but didn’t have any service so I couldn’t warn Jose Alberto about this change of plans.

We got back on our bikes heading for Valdemoro and concluded he would make the same move. Although the road was paved, it seemed endless and each climb hid another one. The fatigue greatly reduced our speed and it took us almost an hour to cover the distance. We also had to remain careful because goats were roaming free on the road, often hidden in bushes. The last thing we needed, was an unfortunate accident with one. At last, the village was in sight, and like automats we looked for the central square with the village’s bar and fountain.

We grabbed one of the many empty tables and ordered three large pints of ice cold beer. It was a wonderful feeling! I then quickly looked at my phone and finally, I had service. That’s when I saw a message from Jose Alberto saying: “I rode in the wrong direction for two hours, I’m going back to Santa María del Val”. We were a little worried that he wouldn’t make it through the isolated section and told him to stock up on water and food as much as he could because there was nothing in Beamud. We also asked if he had spotted our arrows in the sand, to which he didn’t reply. We would not hear back from him for the rest of the day. We couldn’t do much about the situation but hope he would find a shelter for the night.

The bar we were at looked more like a tavern. Inside, there was a large table with ten papis playing cards and a mountain of cents & pennies in the middle. One by one, they walked out of the bar, disappointed by their game, only to plunge their head in the central fountain. For once, we weren’t entertaining the locals with our funky looks, they provided the spectacle. At one point the bar even ran out of glasses (we might have been responsible for this)!

Once dinner was over, we decided not to shower in the central fountain because it was really just in the middle of the bar’s terrace. Instead, we asked locals who pointed us in the direction of a less popular spot. After this much needed “shower”, we looked for a camping spot on the outskirts of the village. A few minutes later, we found a field, setup our sleeping gear and went to bed hoping for another uneventful night.

I was getting used to this new way of life. Although the first few days had been tough, showering in fountains and sleeping anywhere had become the new norm and nothing bothered me anymore.

Come back next week to read about an old papi’s jokes! As always, you can check the route and our activity on Strava using the link below. 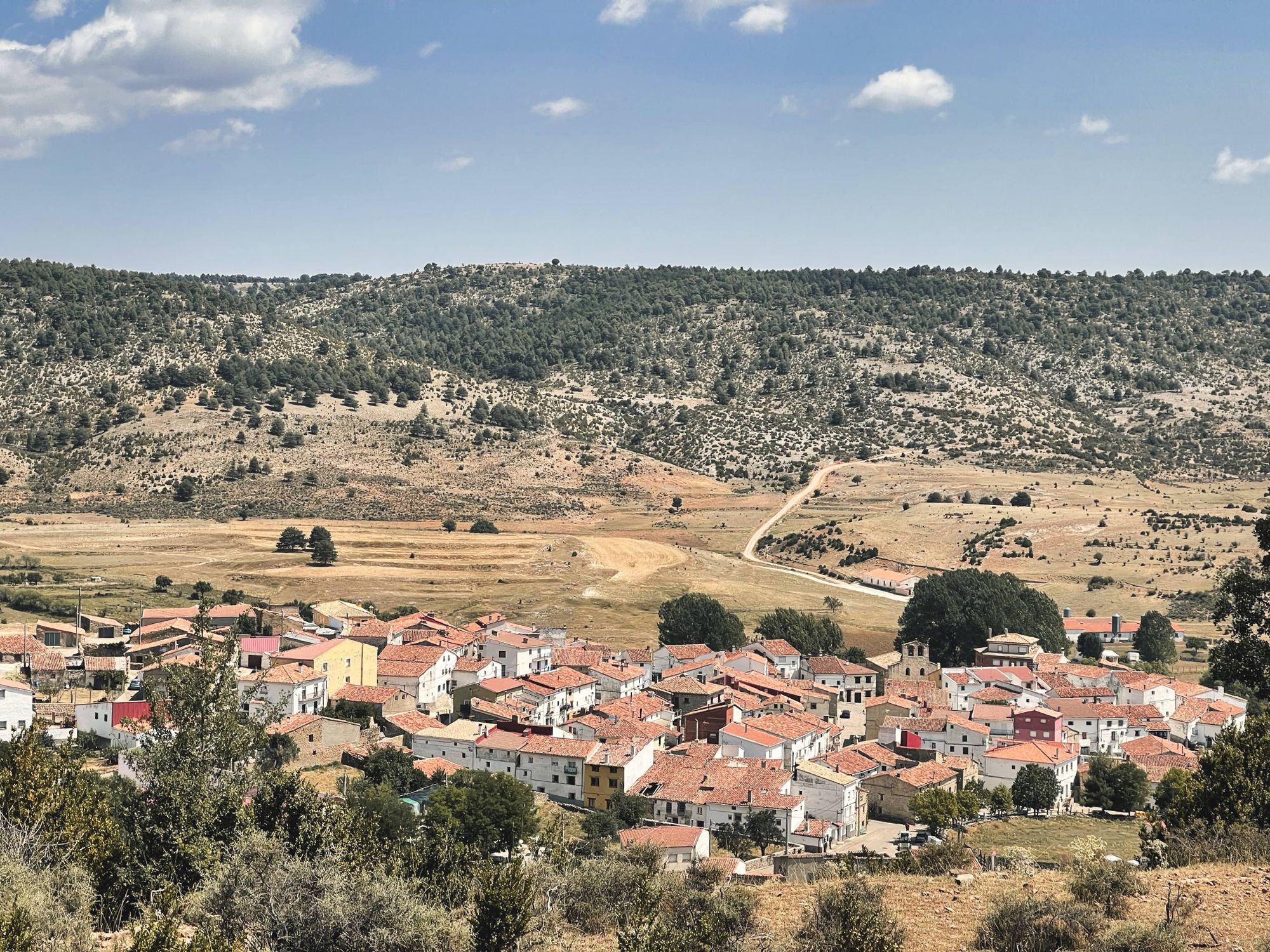 📍 Torre Baja, Spain
🚲 Ride
🖋 Charles Aubert
Bustling villages - MV Day 6
Deep into the Spanish lapland, locals tell us jokes about their twenties, we explore the culture and ride our bikes in beautiful scenery. 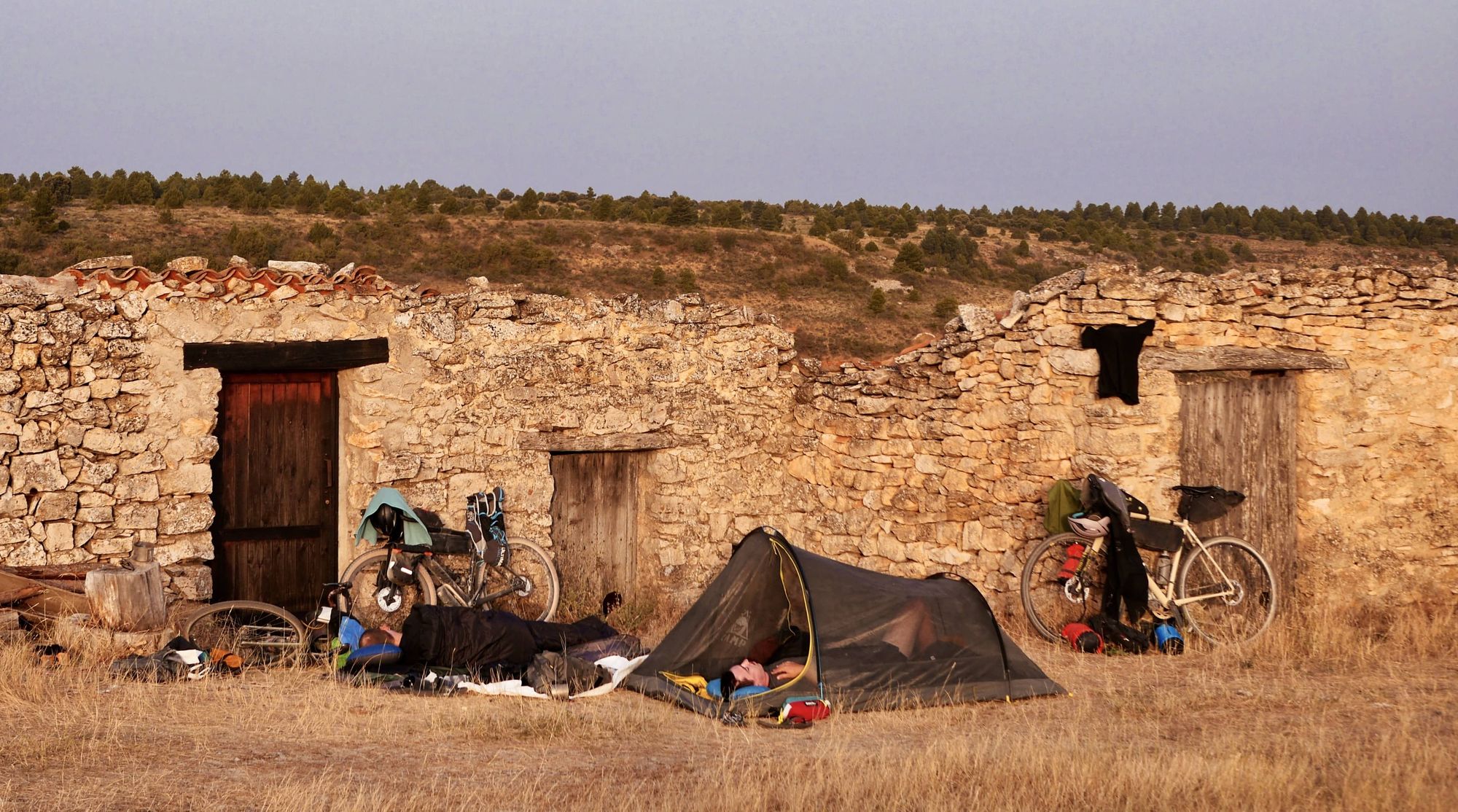 📍 Beteta, Spain
🚲 Ride
🖋 Charles Aubert
Rave party - MV Day 4
We wake up in the middle of a rave party, Mathis drinks contaminated water but we make friends with another rider and swim in a beautiful lake.