This article is part of the Montañas Vacías series. A story about three friends getting reunited for a bikepacking trip over the summer. Read the previous one here: https://quaero.world/rides/montanas-vacias-day-1/.

After a rough first day on the route, we needed a good night of sleep and agreed not to wake up too early. The camping we slept at was located at more than 1700m of altitude in the middle of a beautiful ancient pine forest. Around 8am, the sun shining through the trees gently woke us up. Like most cyclists on a bikepacking trip, preparing coffee was the first thing on our list. While coffee was slowly brewing on the stove, we packed our sleeping gear and loaded our bikes. Since we hadn’t been able to find a convenience store the day before, we gathered our leftovers for an improvised breakfast. It was also the perfect moment for Mathis to try and fix some of his punctured tubes. In retrospective, starting the day fixing tubes was a warning for what was to come later in the day.

With two fixed tubes and a repaired rim tape we set off for our second day on the route. Just a few kilometers in and it was time to check on my body: my legs were feeling pretty good but I was feeling the toll from the vibrations and heat we had endured the day before. Since we had ended the first day with a lot of climbing, the first 20km were basically downhill on a mix of paved and gravel roads overlooking the valley. This slow start helped us get going even though the temperatures were already above 30ºC at 10am.

How to adjust a rear derailleur

Our confidence on gravel descents had grown from the various technical sections we had encountered the day before. We were riding much faster and that felt good! This is what we had dreamed of: remote gravel roads with rewarding views. However, that’s when I realized my gears were not shifting anymore. The group came to a halt and we quickly inspected the derailleur but couldn’t notice anything wrong apart from a slightly loose cable. We had almost reached the bottom of the valley, trees and shadow were becoming scarce so we decided to push towards the nearest village on the route Orihuela del Tremadal before doing any repairs. Although we knew everything about our setups and could be tagged as bike geeks, we were dabbling in mechanical issues. So the first thing on our list was to grab a beer and a bocadillo before watching a Youtube tutorial: “How to adjust a rear derailleur”.

Having watched the tutorial three times, we felt very confident in our ability to repair the derailleur. A few four lettered words later, we realized that the derailleur was in perfect condition: the shifter was the issue. In fact, vibrations had unscrewed a tiny plastic piece that prevented the cable from slipping in the shifter. All of our efforts were vain since the cable was freely moving in the housing. We then spent another hour dismantling the whole piece, retrieving the cable, putting it back into place and reassembling everything. Remember our simple rule about mechanical issues? Well, this one was definitely worth more than one round at the next bar. It was already 1pm, and once again our plans to avoid riding in extreme heat had failed. We had only ridden 20km of the planned 95km.

“What comes up must come down”, but in our case what came down must come up. As soon as we got back on the saddle we hit a hard 8km climb that would lead us near the top of Caimodorro at almost 1950m. The GPS was now saying 43ºC and we stopped several times along the climb to try to cool down. At this altitude, the scenery had changed from dusty plains to alpine forests that clearly didn’t match the heat. Occasional shale veins reminded us we were ridding through the Iberian peninsula. The heat caused us to have flutter moments and we each had trouble eating or drinking anything even if we desperately needed to.

After resting a bit at the top of the climb, we headed towards the next village: Griegos. We were in luck, the rest of the way was paved and allowed us to progress a little faster. This short moment of relief was quickly countered by us reaching the end of the forest and descending towards a high altitude plateau. We couldn’t benefit from the trees’ shadow and the melting asphalt was reverberating this unbearable heat. Small inclines turned into long and slow climbs. The road was closing in on two ski stations, poles were standing to delimit the path in case of heavy snow falls. All the ice warning signs didn't help mentally either. It seemed unimaginable that temperatures could drop below -15ºC with several feet of snow during winter.

A few kilometers later, we finally reach Griegos. Without hesitation, Mathis plunged his head in the ice cold water of the village's fountain. With our heads cooled down, we grab a table at the only bar in the village, order a few tapas and started discussing the rest of the trip. We had managed to push through the first day but that afternoon, we started realizing that we may not be able to finish the entire route with the ongoing heatwave.

We knew the challenge ahead would be no easy feat. The book we had printed for the trip with all of Ernesto’s notes also reminded us that we hadn’t yet passed the several and lengthy zones without options for water or food resupply. It was supposed to be an easy trip but we knew that pushing our bodies to their limits would prevent us from fully enjoying what the region had to offer. Each of us shared their own views and we decided to drop our kilometric objectives. Instead, we would ride and plan along the way and see day after day how we were holding up. After this much needed rest stop, we headed out of town with our compass set on the source of the Tajo river or Nacimiento del Tajo, the end of the first chapter in Ernesto’s guide. Our efforts were rewarded with magical gravel roads traversing forests, fields and ranches. Our motivation was high, the roads were mostly downhill and we quickly made our way to the Tajo river.

An imposing statue and three monoliths greeted us at the river's source. They symbolized the three regions in which the river is formed as well as the deep cuts it creates in the mountains on its way to the Atlantic ocean in Lisbon. Known for its icy waters, the monument is ornamented with snow flakes which contrasted the temperature still above 40ºC. After refilling our water reserves, we got back on our bikes to enter the second chapter of the route: el Tajo. In fact, the road we riding on followed the river’s banks for the next hundred kilometers.

With a few paved and mostly flat kilometers ahead, we pushed on. Clouds were forming on the horizon and we were even rewarded with a little bit of rain! Then, at the detour of a corner, Antoine got a flat on his front tire. Even though it meant a round at the next bar, we were quite tired with our shifter repair from the morning. However, since he was running tubeless tires, the repair only necessitated a quick inspection and sealant refill.

We then resumed our adventure towards the next village, Checa, located some 40km away. It was already 7pm and only one of us had lighting equipment so we had to keep moving. Luckily, apart from a few steep and winding climbs, the route was mostly flat and non technical. The only thing between us the village was a stunning road. Turn after turn, new landscapes were unfolding before our eyes. We felt like we had found what we came for: empty mountains. The sun was fading away behind clouds and made this moment even more magical. Soon after, we started the final steep climb of the day and then descended towards Checa.

Checa was our final destination for the day, so we found a spot at the nearest bar that also happened to be a restaurant. We ordered six portions of lasagna alongside the same number of pints. At this point you may start thinking that we were always drunk, but that wasn’t really the case. Looking back, our bodies needed minerals and plain water repelled us, so beer was often the only option. On these first two days, we drank almost ten liters of water without needing to use the bathroom.

Only one thing remained before we could a find camping spot: we desperately needed a shower. Each village had at least one fountain and soon after our dinner, while we were washing our faces, Mathis decided to shower in one. Antoine and I would quickly follow. Since the fountain was on the central square, our impromptu spa attracted the locals who weren’t used to such entertainment. From kids playing football to adults leaving the restaurant, they couldn’t help but laugh and so did we!

We then headed for a refuge located just two kilometers away from the village. Once there, it wasn’t very clean and we setup camp in the entrance. We were deep into the empty mountains and, without any light pollution the stars illuminated the night. We felt alive, and only needed to satisfy our basics needs.

A physical and emotional rollercoaster, that was the adventure

Stay tuned for the third day on this adventurous journey through the empty mountains. You can check the route and our activity on Strava using the link below. 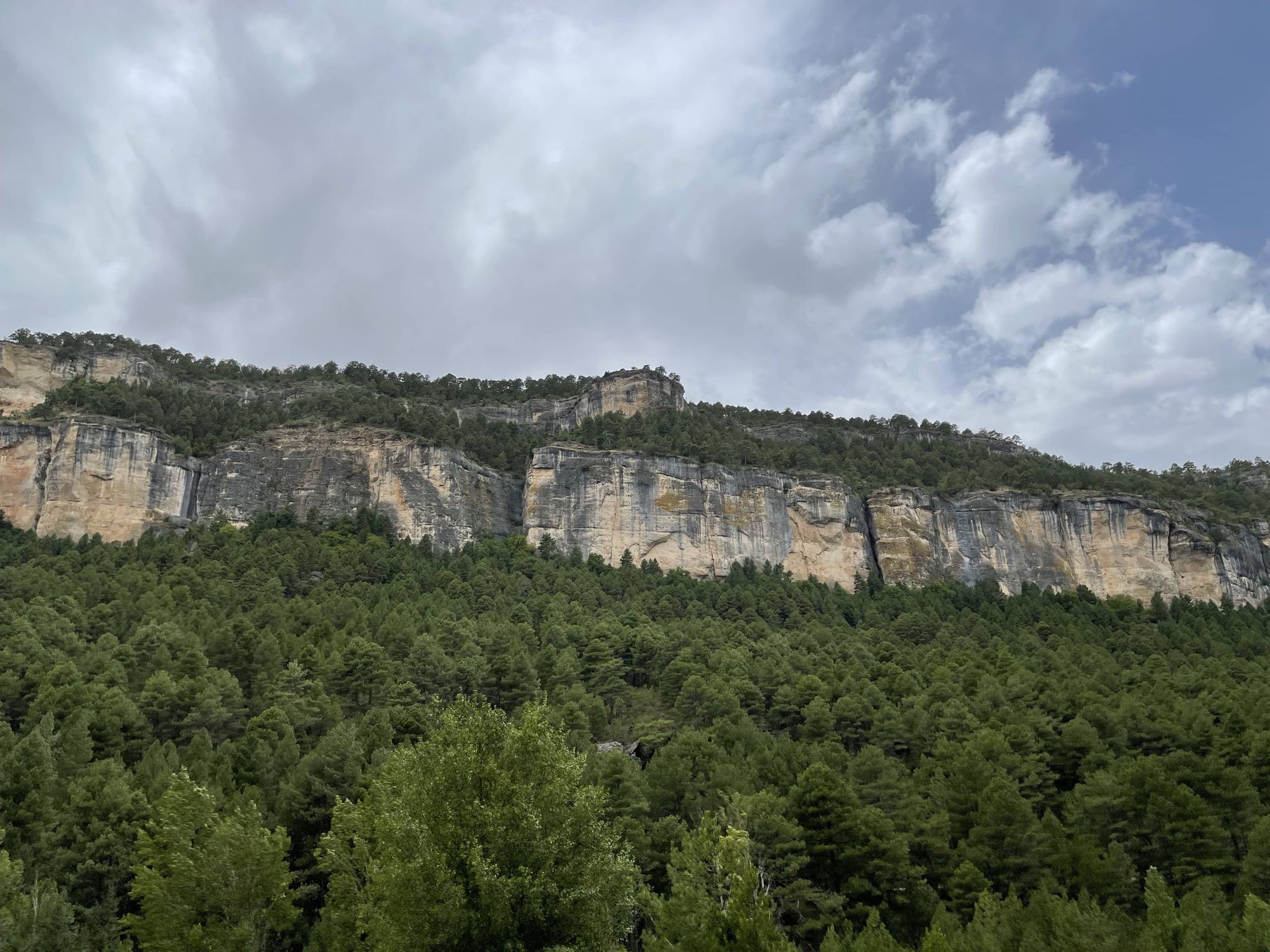 📍 Zaorejas, Spain
🚲 Ride
🖋 Charles Aubert
Follow The River - MV Day 3
After fighting a bat in the middle of the night, we follow the Tajo river down a rocky canyon and swim in its icy waters. An easier but not restful third day on the trails! 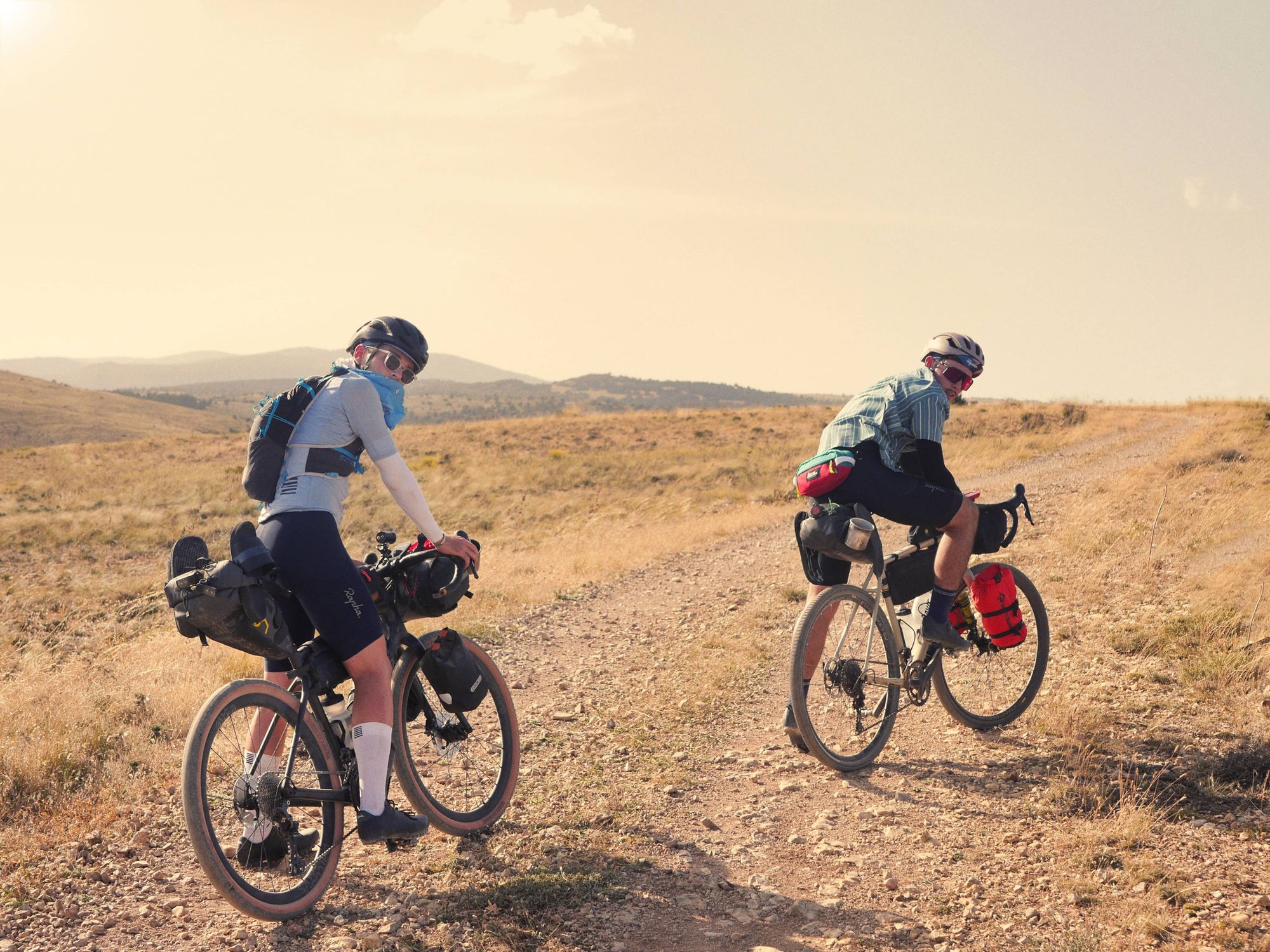