This article is part of the Montañas Vacías series. A story about three friends getting reunited for a bikepacking trip over the summer. Read the previous one here: https://quaero.world/rides/montanas-vaccias-preperations/

We had set our alarms for 7am with the intent to quickly get going and try to escape the heat. However, our night was interrupted by a group of drunk and high germans who sang and danced until 4am. While it could have been a folkloric party in another setting, it meant we weren’t out of the “albergue” (hostel) before 8:30am.

Our rough sleep didn’t matter because we were so excited to assemble our bikes and get going. The day before, we had asked the “guardia civil” (police) where we could park our car for ten days so we headed to the parking spot they recommended and started packing. That moment was a bliss, everyone was putting their bikes together and getting ready to ride. We had thought of everything and at this point we felt like noting could stop us.

Once the bikes were assembled, we did a short test by rolling into the town-center to find breakfast. As usual, the central square proved to be a great spot, buzzing with locals also enjoying breakfast and fresh air before the temperatures rose to unbearable levels. We ordered a few “tostadas con jamón y tomate” (toasts with ham and tomatoes), expressos (lots of them) and orange juice. Before leaving Toulouse, we printed a small book with all of the route’s information and it was the perfect occasion to start looking at the day ahead.

Whatever happens, keep your mind cool and stick together.

Our three bikes were lined up, and soon enough one of the locals came to us asking if we were going to ride the Montañas Vacías route. He told us we were crazy considering the heat that was forecasted for the day. He had had a go the route himself and shared a few wise words (with the local trilled Rs:) “Whatever happens, keep your mind cool and stick together.” With that in mind and our bellies full, we topped our water reserves from the central fountain and headed to the start of the route, just outside of Teruel. But we couldn’t start riding without taking the traditional “before” pictures, so the three of us posed with our setups.

Now we could start our adventure! The plan for this first day was to reach one of the highest camping in Spain (alt 1727m), Las Corralizas located in Bronchales. According to the GPS, we had about 80km to ride and 2300m of elevation along the way.

After riding the first few kilometers, we started realizing how much the heat was going to impact our bodies for the days ahead. Although the way out of Teruel was an even 3% climb on packed dirt roads, it felt like we were almost giving it all. Luckily, the landscapes unfolding before our eyes captured our attention and made us forget about our legs. The route winded in a colorful, yet arid void that turn after turn looked more and more like Mars. With each turn, new panoramas appeared on the horizon and the first 20km disappeared behind us.

We left the arid plains for a dense pine forest that quickly prompted us with a detour for “impressive views”. One cannot pass on such a promise and we tackled this short but steep climb towards the top of the dead-end road. Ernesto (route creator) didn’t lie, after what felt like a mountain pass for our legs, we were rewarded with scenic views overlooking the whole Sierra de Albarracín.

At the very top of the road stood a watch tower with a very kind ranger that took a picture of us. We exchanged a few words about the forecast and she also reassured us about the low fire risk.

A simple rule: one puncture means a round at the next bar.

On the descent back to the main road, Mathis opened the mechanical festivities with the first puncture of the trip. Before leaving, we had agreed on a simple rule: one puncture equals a round at the next bar and a big mechanical equals two. Once fixed, we checked on our reserves. We had underestimated how much water we would need for the first 50km of the route and had all run out of it. Now that a beer was waiting for us at the next stop, we bombed down a perfect gravel road, traversed wheat fields and after a few climbs reached one of Spain’s most iconic villages: Albarracín. We walked into the center, found a bar, sat down and ordered six pints right away. As one could have easily predicted, soon enough we were feeling quite tipsy. However, it was 4pm and the bar wasn’t serving food so we had to find a restaurant that would. Not an easy feat when it requires walking up and down stairs with your bike. After asking around, we finally find a place that had a few slices of tortillas left.

Having rested a little, we left for the final stretch of the day. Only 25km were now separating us from the camping in Bronchales. “Easy, about an hour and a half!”, at least that’s what we thought. The climb to exit Albarracín was brutal and quickly turned into a rocky staircase and the first hike-a-bike of the adventure. With nothing but beer in our veins, this first kilometer felt like an eternity and twenty long minutes later we would finally reach the top of the village overlooking its fortifications.

What followed was a sequence of long winding climbs on barely ridable terrain ranging from soft sand to chunky rocks in heat that was still well over 40ºC. We were digging deep in our legs and this “final stretch” turned into three hours of riding. Even the descents took a toll on our bodies with vibrations that resembled  a washing machine. But this constant physical pain was strongly contrasted with landscapes that left us in awe. The sun was slowly starting to set, its rays were gently caressing the treetops and illuminating the clouds of dusts elevated by our tires. The fatigue was real and accentuated by the second puncture of the day for Mathis (or another free beer for Antoine and I).

As we closed in on Bronchales, we passed by locals enjoying a large barbecue. The temptation to stop was strong but we kept pushing one kilometer at a time. At 21:30 we finally make it to Bronchales where the last climb of the day awaited us to reach our camping grounds. The reward was a fresh shower to remove the dust and salt that had baked on our skins throughout the day. We treated ourselves with (surprisingly) very good burgers and ice cold beers. It was time for us to draw conclusions about this first day. We had planned our adventure with 70 to 80km per day but the heat made everything more difficult and what we thought would be “chill” vacations became a physical challenge. Midnight quickly came and we decided to see how much we could recover from a night of sleep under the stars.

The first day on its own felt like an entire adventure.

Stay tuned for the second day on this adventurous journey through the empty mountains.

You can check the route and our activity on Strava using the link below. 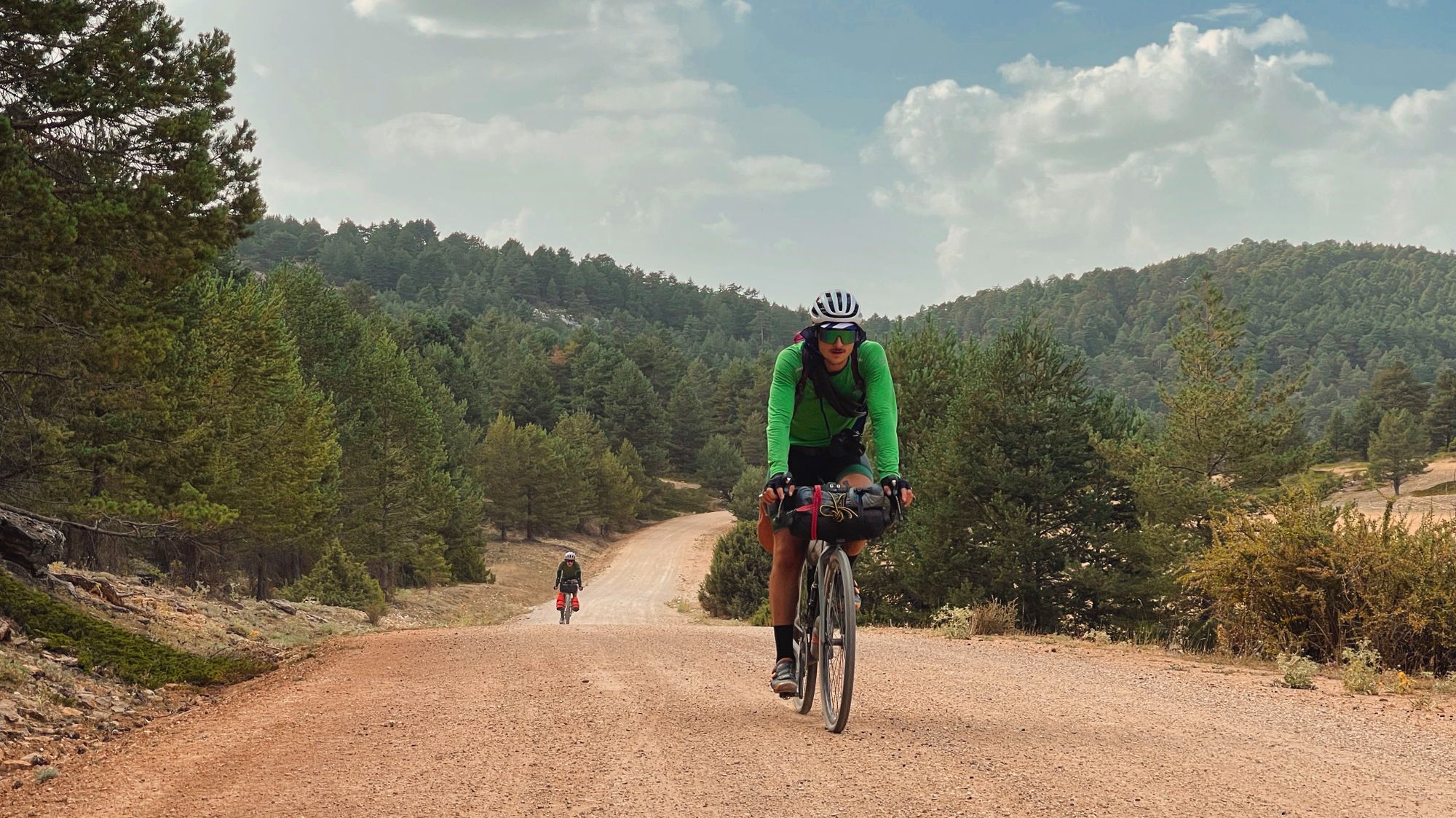 📍 Checa, Spain
🚲 Ride
🖋 Charles Aubert
Shifter Failure - MV Day 2
Things didn't go according to plan during this second day on the MV route. A mechanical, physical and emotional rollercoaster under the scorching sun. 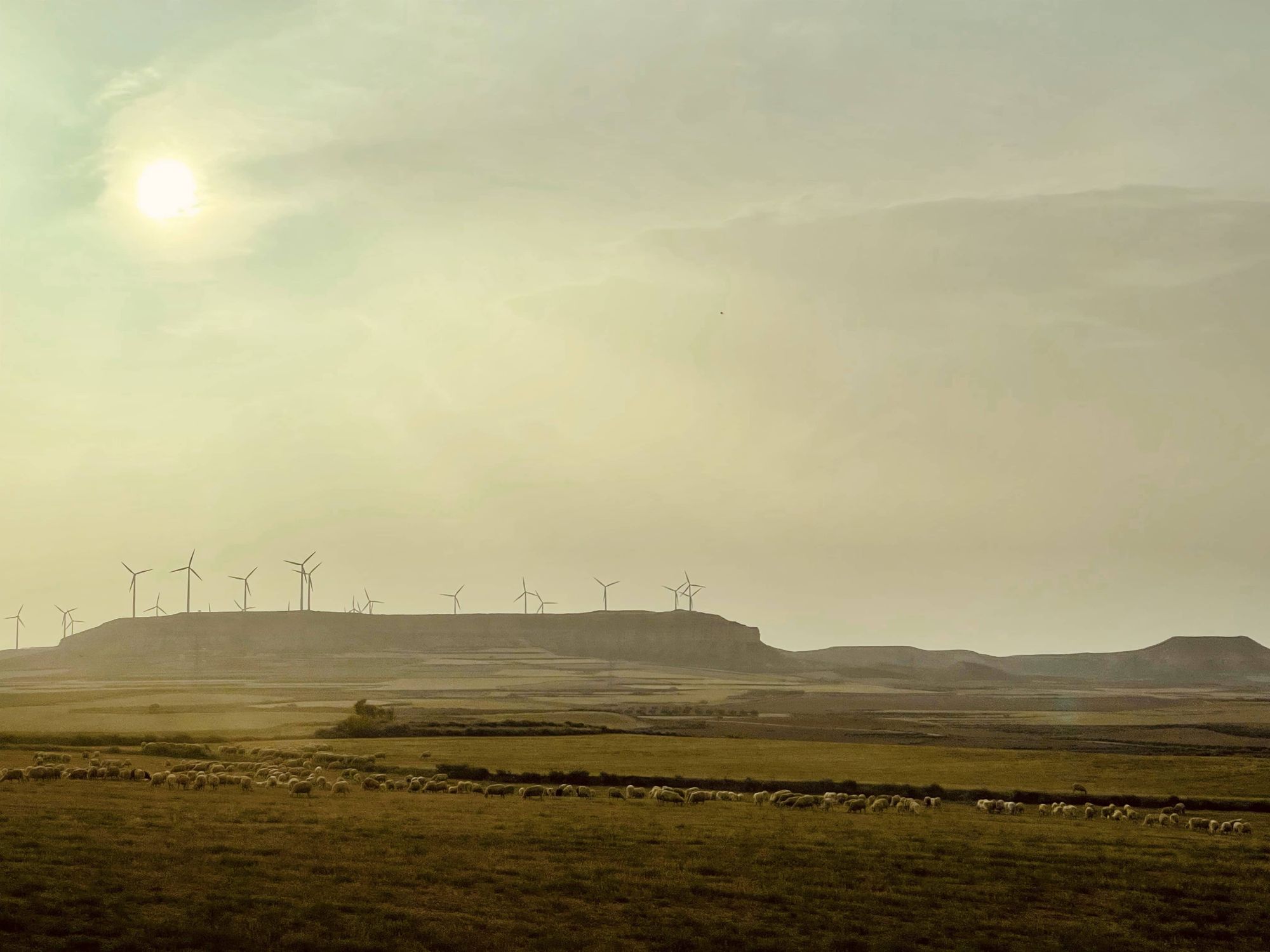 📍 Teruel, Spain
🚲 Ride
🖋 Charles Aubert
Montañas Vacías - Preparations
This is the story of three friends (Antoine, Mathis & Charles), who for the better part of the year had been dreaming, discussing and planning to get reunited for a bikepacking adventure over the summer.