To our delight, the adventures shared here have inspired others! On this hot summer day in the Pyrenees, we welcome Thomas to the group for a chill day on the saddle. A few years ago, Café du Cycliste, a bike apparel brand from Nice explored the Ariège backcountry and shared a few tracks along the way. Intrigued by their “Grotte Loop” (understand cave loop), we downloaded the route and headed to Pamiers for further exploration.

Our day started in the four corners of Toulouse. The rendez-vous was set for 7:30 am at the train station in the center. The easiest way to get to the Pyrenees was to board a TER early in the morning and we couldn’t miss its departure. To save some precious sleep time, we had each grabbed breakfast on our way to the station and were planning to eat it on the train. At 7:42 am, the train set off with all of us board and our bikes safely stored. Our small adventure was on!

Antoine who had arrived earlier at the station had managed to grab coffee. The rest of us, though, were longing for some. As we got off the train and started the route, we headed towards the first village in the hope of finding a bar. The weather was perfect, the temperature too and we used the first kilometers to stretch our legs and get ready for around a hundred kilometers.

There it was, a bar filled with locals and plenty of free tables. With a bakery just across the street, we ordered coffees, and orange juices, bought more croissants and let the atmosphere impregnate us. In the background, imagine grandpas chatting about rugby, horse races and other hot topics! It was only 9am but some of them were already ordering their second beer.

We set off again, just before 10 am. Sinuous, quiet, and empty stretches of backcountry roads awaited us. Leaving Varilhes, we sped up through the first set of rolling hills like an eclectic racing team. It’s our kind of cycling, relaxed, not worried about the time, the kilometers, or anything else. Our sole focus was on enjoying the moment and the vibes were high! A few villages later, the speed train slowed down as we tackled the first difficulty, the Pas du Portel.

Before descending, we took the traditional sign picture, justifying our effort. Though the picture attests of the climbing, the descent is the reward! With an immaculate road and the Pyrenees’ summits watching over us, this one didn’t disappoint. We then turned onto a cyclist’s paradise, codename DA1. Picture a small road that slowly descends into an untouched valley. We barely needed to pedal and our eyes were riveted on the scenic landscape.

Following a local’s instructions, we stopped at the bottom of the valley to fill our bidons with a rumored miraculous water. When we got to the “source” the flow was so little that it took us close to fifteen minutes to fill up. Though, someone there was replenishing entire jerrycans and had planned to stay for the day. Still intrigued by this typical Ariégois lifestyle, we continued our journey to the next bar.

We had already ridden almost half of the route and gave to the temptation of a table in the shade of a plane tree. Looking at the beer selection, we were glad we did! We rewarded our taste buds with an artisanal white beer, brewed with verbena. Amazed by the subtle mix, we were quick to order a second round. While locals were wondering if beer would help us in the climbs, we took a glance at the map before setting off once again.

Just a few kilometers were separating us from the cave. The rock was already wrapping around the valley, further enclaving the road. And there, after a corner, the road became almost completely dark. Guided by a few dim lights, we were as if sucked by this chasm in the rock. Cold air emanating from the loud but indistinguishable river gave us goosebumps. This sudden change of environment put our senses on alert: our ears, tuned to the river, our eyes, chased shadows, and our fingers, touched cold humid rocks. La Grotte du Mas d’Azil is a sight to be seen!

Exiting the cave, we were blinded by the lights, breathing suffocating heat. It was as if someone had turned off an oven for a moment before turning it back on. Nonetheless, amazed by the cave, we continued our journey towards the south, going up a long climb. Once again, the Café du Cycliste did not disappoint with a sinuous road hidden away in a primary forest.

At the top, stood a tall church, with stunning views over the Pyrenees. Going around the back of it, we were lucky to find a water tap. While some were filling their bidons, others were enjoying a quick snack. We had done two-thirds of the route but the main climb remained and this quick refill was just what we needed.

Even though there wasn’t a sign to attest of our effort at the top, the descent was a big reward. In fact it was so enjoyable that we stopped and climbed back up a few sections to take pictures. Hairpin after hairpin, the distant valley unfolded before our eyes. As we progressed, it became evident that this cycling bliss would soon end with the main climb quickly approaching.

The road steepened during the first hundreds meters before settling for more reasonable gradients. Once on "flatter" grounds, we realized how dry the vegetation was in this valley. Brown trees and almost burned fields reminded us of the abnormally dry and extremely hot summer we were experiencing. Luckily, the road entered a forest again and fresh air cooled our bodies. Mathis who had taken a long break from cycling used every inch of the road going up the painful hairpins. As we closed in on the top of the climb, our minds were now set on what we would have for lunch.

You can appreciate how hungry we were because we didn’t bother to stop for pictures during the descent. Turn after turn, we pedaled like animals and zoomed downhill. Antoine has his GPS set on Foix the biggest nearby city, famous for its medieval center. Unfortunately, by arriving at 2:30 pm, most restaurants weren’t serving anymore… Armed with our dedication and negotiation skills, we managed to find a table in a small yet busy street.

Several rounds of beers and large pasta plates later, it was time to head to the train station. Although flat, the remaining kilometers were definitely the hardest ones! But we were so content with our day that the brutal heat, headwinds and bad roads didn’t matter. Half an hour later, we reached the platform, bought our return tickets and waited for the train to arrive.

We boarded the packed train with our bikes and chatted the whole way back. Already thinking of our next adventure, we soon arrived in Toulouse. It was a day for the books: great friends, impeccable roads, amazing beers, and stunning landscapes!

🌄
Have you ever ridden through a cave? What's your type of riding? Let me know in the comments!
Discover more adventures 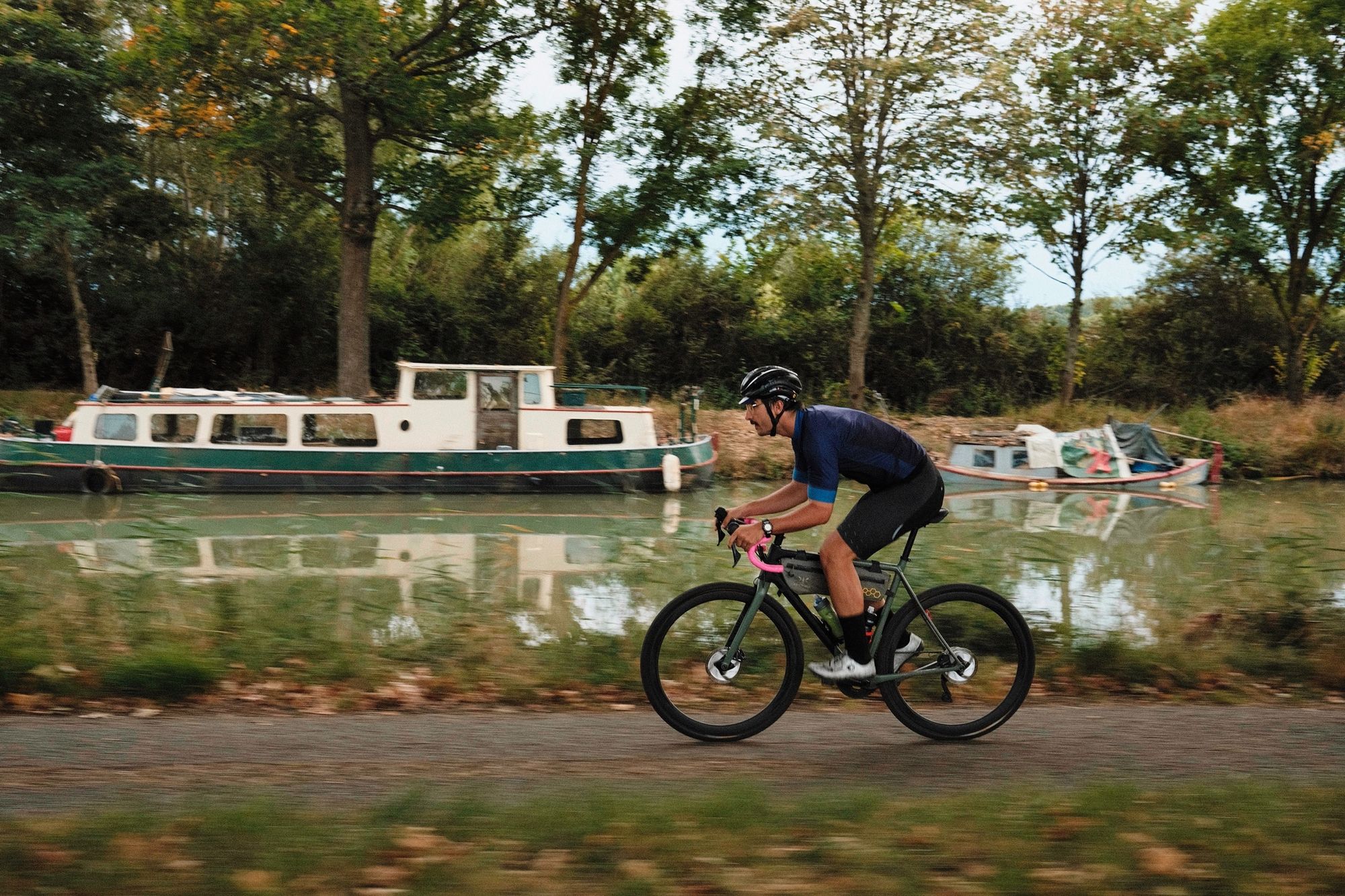 📍 Toulouse, France
🚲 Ride
🖋 Charles Aubert
Not Your Average Road Ride
Cooler nights mean we can finally enjoy riding after work. Embark on a not-average road adventure around Toulouse, with the biggest group we've ever featured! 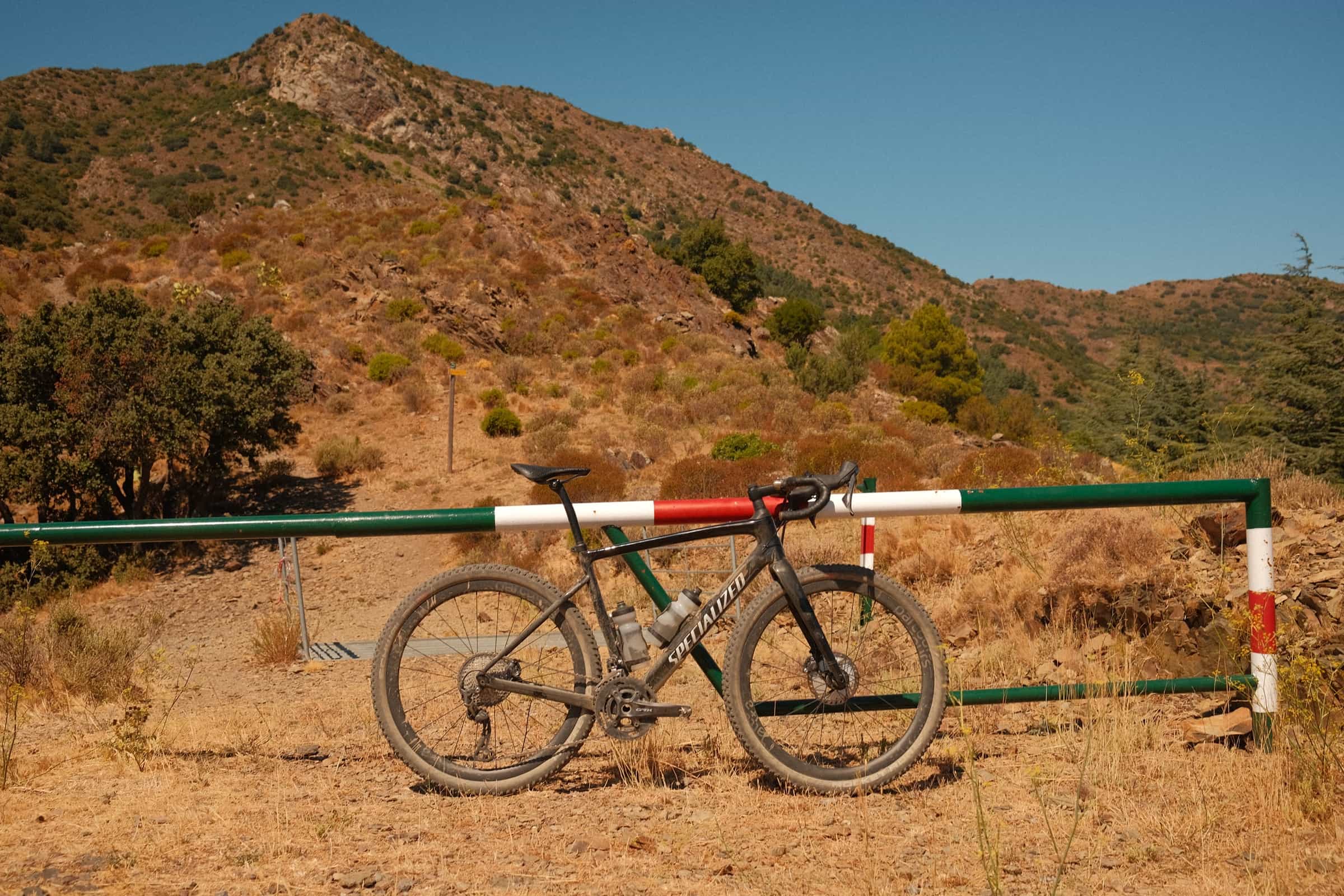 📍 Collioure, France
🚲 Ride
🖋 Charles Aubert
Gravel Bliss in the Vineyards
The much-anticipated grape harvesting season is finally here in Collioure. I wander through vineyards, exploring gravel paths on both sides of the border, a bliss!