September brings autumn and with it, cooler Indian summer days and evenings. On a cloudy late summer night, we explore the hills surrounding Toulouse, perfect for afterwork road rides. Convinced by our relaxed approach to cycling, we welcomed two new riders, forming the biggest group ride we’ve hosted here on Quaero. Although short in time and distance, this ride reminded me of a campaign by Rapha.cc, it's “NEVER JUST A RIDE”.

Don’t hesitate to follow me on Strava and grab the GPX track using the link below!

Beginning on the outskirts of Toulouse, not far away from the Canal du Midi, we set off around 7:30 pm, planning to ride around 40km and finish in style with a dinner in town. Since it’s #neverjustaride, we stopped a few times during the first kilometer to fix various mechanicals, adjust tire pressures, etc. For once, I was the one who had rushed to get ready and had forgotten to check my tires. However, as the “photographer” and “writer”, I choose what you read and see, so we’ll focus on Mathis’ adjustments.

Now that we had spent enough time fixing our rides, we joined the Canal du Midi, the preferred way to get out of town safely, away from traffic. With new recruits, the flat cycling path on the canal’s banks is a great way to get accustomed to riding in groups safely. As the kilometers went by, barges became scarce, we were now in the countryside.

Some of us had loads of energy to spend, and it was just a matter of time before an échappée broke away. Borrowing gravel tracks on the side of the path, Mathis and Thomas battled for a kilometer before rejoining the group, satisfied with their stunts. After ten kilometers, we had had time to warm up and were almost ready for the first climbs.

A snack break was mandatory and we stopped at the foot of the first hill. Another perk of riding with a group is sharing snacks! From cereal bars to nut mixes, we traded our favorite speed boosters. With the sun getting low on the horizon there was no time to lose. The only rule we had for climbs: everyone waits at the top!

One climb after the other, we wandered through the countryside on twisty and quiet roads. On the third one, everyone had found their pace and was truly enjoying the rewarding effort. Taking advantage of my fast bike, I managed to snap pictures along the way, documenting our “climbing faces”.

Once at the top, we cruised on rolling roads. Tense expressions had been replaced by plain smiles! Though cloudy, the views were also amazing: on one side, the Montagne Noire, on the other, the Pyrenees. One surprise remained, a hidden spot for fig picking. That’s right, a series of fig trees at the very top of the hills with delicious treats. Whether you’re in need of sugar or not, you can’t resist!

Just a few pedals turn away, a cemetery with a water tap. Perfect for refilling bidons and satisfying a small hunger, this road had all the amenities we could hope for! Following this small feast, a series of fast descents traversing forests and suburbs. We dashed through the now dark countryside, heading for the last climb. Motivated by beers and diner, we reached the top in no time. From there, it was all downhill!

Our lights lit up the night as we rode on the streets of Toulouse. We cooled down, cruising through large avenues and boulevards in search of an open shop. After a few kilometers, we found the perfect one, stocked with fresh beers. The plan was to buy whatever we needed and have dinner at Antoine’s place. Our creative minds came to the rescue to carry our supplies, but do not reproduce at home; we’re trained professionals!

Falafels, humus, beers, and friends were a perfect set to end our ride. The only conclusion that could be drawn from this ride: we should do it more often! That’s the power of cycling, especially in groups, it definitely is never just a ride… Even short adventures near home will fill your thought with anecdotes, stories and memories to share! One question remains, when will you join us?

🤝
Would you be interested in joining one of our group rides? Let us know in the comments!
Discover more adventures 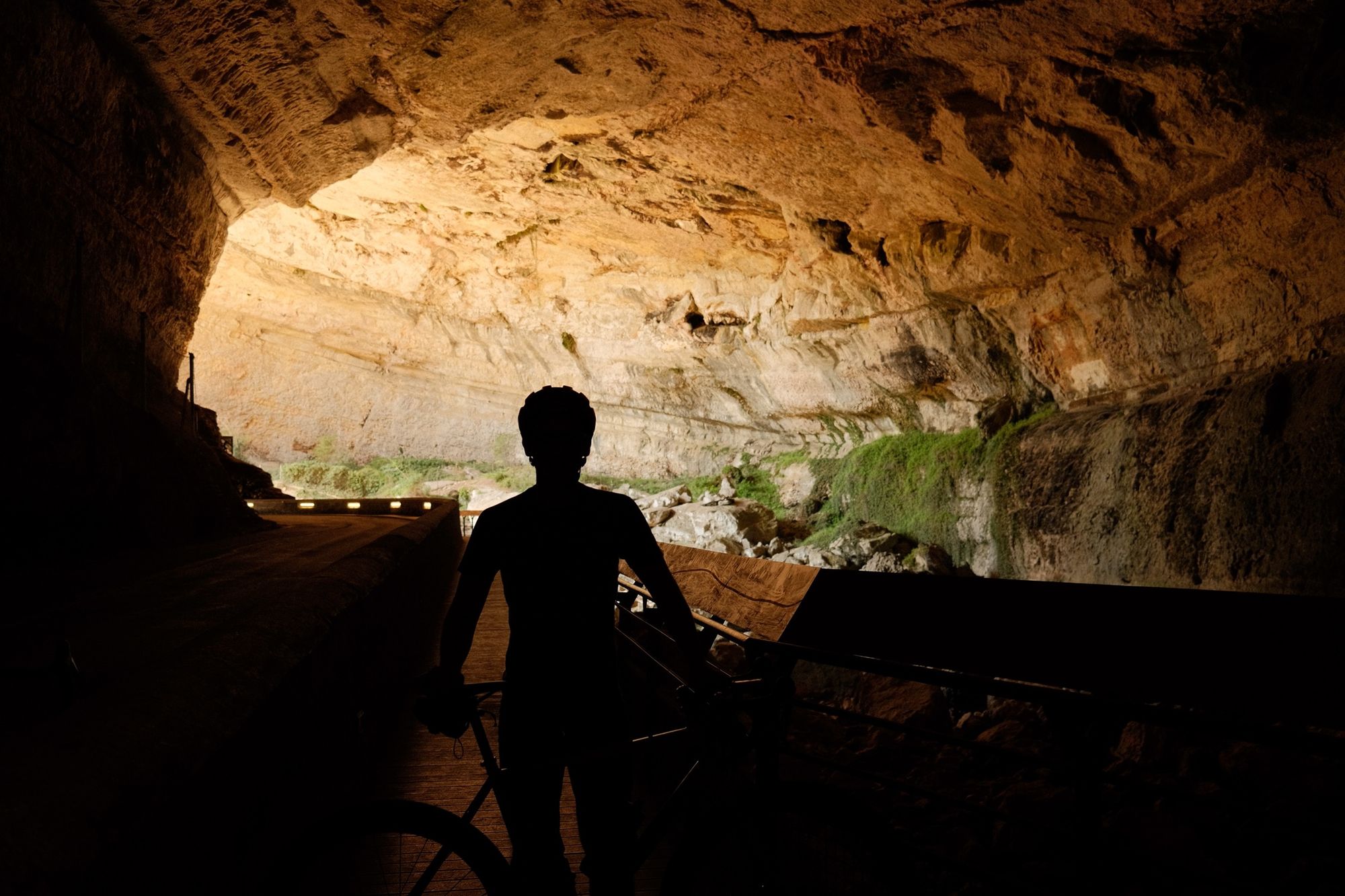 📍 Mas d'Azil, France
🚲 Ride
🖋 Charles Aubert
Riding the Grotte Loop
Taking inspiration from the Café du Cycliste route, we ride through a dark chasm in the rocks. Artisanal beers, stunning landscapes, fast descents, all the ingredients to an amazing day in the Pyrenees.