Quaero has a new outpost in the big apple! After months of delays, and several setbacks, I've finally made it to the city. In my previous article, I thought summer was over but on this second ride with the RCC, I was proved wrong. Dressed with my summer kit, I joined this amazing group of people for a brunch ride along the Hudson river. Sun, sangria, colors, and the ambiance were impeccable!

Don’t hesitate to follow me on Strava and grab the GPX track using the link below!

The last three years spent away from the city, have definitely eroded my orientation skills. My first checkpoint was the Williamsburg bridge, crossing the east river into the city. The rendezvous with another rider (Katy 👋🏼) was set for 8:15 am. I left my new but temporary place in Crown Heights with a vague sense of where I was heading. A few wrong turns and mistakes later, I had made it to the bridge on time.

Unfortunately for me, Katy had decided to snooze a little and couldn't meet at the bridge. Time was running out and I rolled across the pink structure, reminding me of my time here in 2019. There was no time for nostalgia though because, on the other side, the chaos of the city was waiting for me. Luckily, I came across Rob, another RCC fellow who pointed me towards the "easiest" way to the GW bridge. Junctions provided small moments of rest amidst the chaos, and I could fully appreciate the incredible light reflecting on the One World trade center.

I joined the river greenway and continued my way toward the bridge. To my delight, the path was surrounded by amazing colors and scenery that I had missed for a while. A few kilometers later the bridge was already in sight. Dozens of cyclists seemed to converge towards a single line, the George Washington bridge. After a mandatory stop to appreciate the skyline, sun, and colors, I finally arrived at the start point of the ride.

Smiles, chitchats, laughs, the excitement was real! Everyone had apparently understood the assignment: brunch and chill. The ride, organized by Neil would take us along the river road, up a few hills, down into Piermont, and back to the start on the 9W. The group was larger than ever before, and we couldn't wait to get going.

Just a few hundred meters after rolling down towards the river, Emma got a flat (inevitable with such a large group). A few of us stopped to help and make quick work of this mechanical stop. We were back on the saddle in no time, enjoying the colors, warm weather, and relaxed vibes! With rolling hills and practically no cars, river road makes it hard to believe NY is just across the water.

We needed to rejoin the rest of the group, waiting for us at the top of the "Alpine" climb. Though there's nothing alpine about this climb, it definitely breaks the myth that NY is flat. At one point the road transformed into a carpet of leaves with hundreds of shades of orange, yel,low and red. We passed a few other groups and quickly rejoined ours after a short but intense effort.

After a few safety instructions from the incredible ride leaders, we exited river road and took a right turn on the 9W, USA's most popular cycling road. Borrowed by almost all cyclists in New York and New Jersey, it will take you all the way up to Canada if you fancy an adventure. As we made our way back into New York state, past the 9W market, a few rolling hills had, unfortunately, split the group. As with all social rides, we stopped to let everyone catch up and decide of the route.

We got going again, heading for more climbs in a small foresty area. Although the roads seemed much quieter, a few bad drivers reminded us of our precarious situation on the bike. We soon found ourselves at the bottom of a steep but short climb, great to stretch the legs! Armed with my camera, I rushed to the top, hoping I would be able to snap a picture of each of us. After whistling my way up the climb, I found a background with amazing colors, just in time.

The hardest part was now behind us. The brunch was on everyone's mind and the smiles showed! After waiting for everyone to regroup, we resumed our ride, continuing on a ridge, overlooking the river. The views were as stunning as the colors, road, and people! Vince had a few watts to spare and decided to show off in front of the camera, dashing through the rolling hills.

We were now just a few kilometers away from our brunch spot. A few of us secured the road as the group carefully turned through a steep and slippery hairpin. Another great location to snap more photos, before heading at full speed towards Piermont. The excitment was palpable and we reached the 9W market in no time.

A cycling sanctuary, the market has everything you could imagine from cookies to burgers and more! Once there, it felt like summer all over again! Outdoor tables, parasols, and fresh drinks were just hinting at the amazing ambiance. It didn't take long for some of us to order ice-cold beers and enjoy the unexpected warmth.

As I waited for my burger to arrive, it seemed like sangria jars were calling me. If you're a regular Quaero reader, you already know where this is going! Little convincing was needed and a few card swipes later, we were the proud owners of three jars with enough ice-filled cups to try all the flavors.

What we hadn't anticipated? Most of the group was already heading back for the city... But there was no way we would leave sangria behind. We grabbed chairs, got comfortable, and spent a few more hours sipping through the jars, working on fall tanlines.

The clock was turning though and daylight was becoming scarce, we needed to head back. The remaining four of us (Patti, Emma and Neil) jumped back on our bike, and rolled straight onto the 9W. Fueled by sangria, we flew up the stateline climb! We had agreed to ride at a chill pace but ended up hammering all the way back up to Strictly Bicycles (a famous shop along the 9W).

After parting ways with Neil at Strictly, we crossed the GW bridge. Fortunately for me, Emma was also heading back to Brooklyn which meant I wouldn't get lost. We dashed through the busy streets and soon found ourselves at the RCC, just a bridge away from Brooklyn. The sun was about to set, marking the end of an incredible day spent on the saddle. From the amazing community to the vibrant fall colors, New York had welcomed me with open arms!

🍂
Have you ever ridden in New York? What's your favorite season? Let me know in the comments!
Discover more adventures 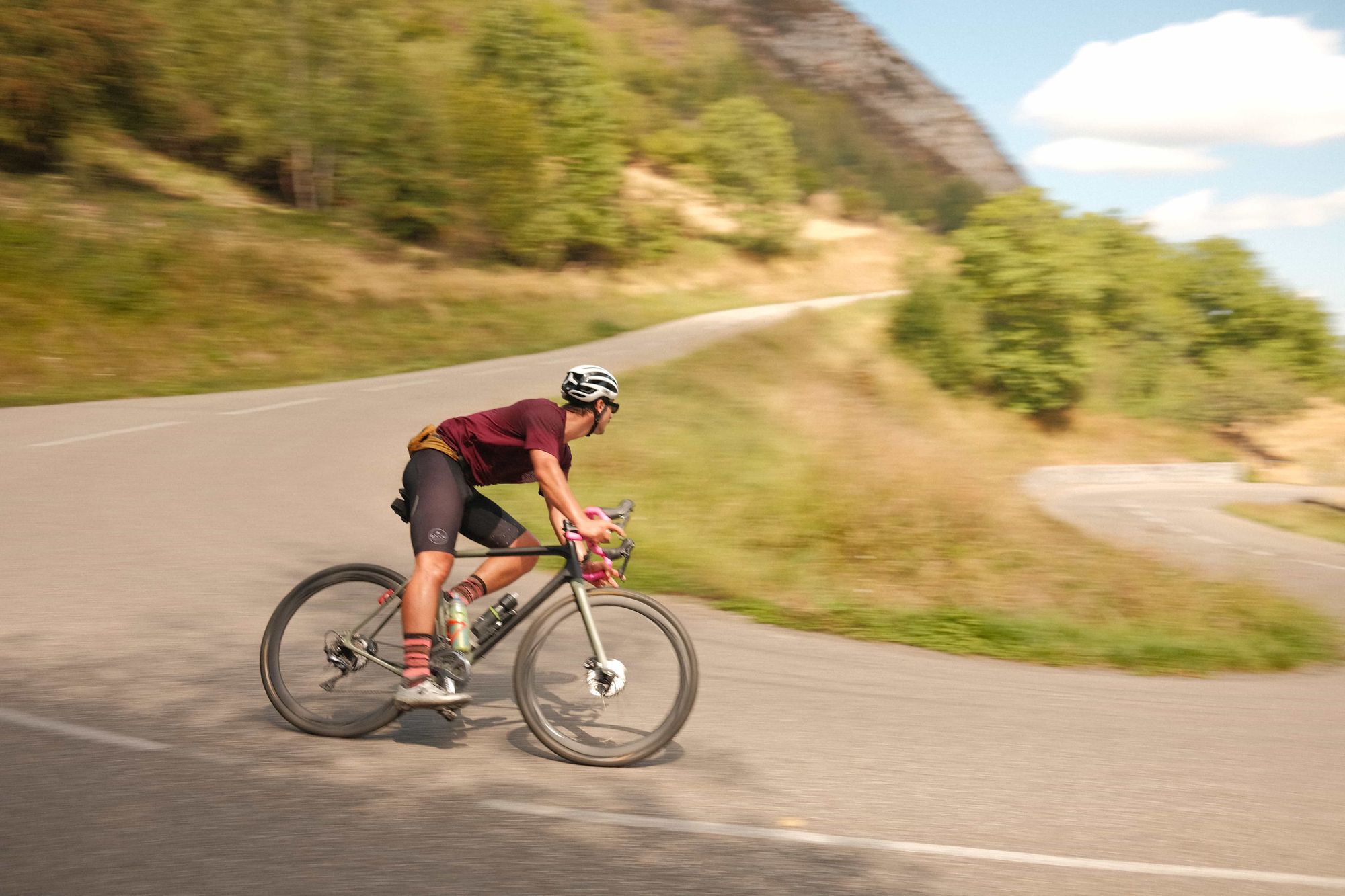 📍 Foix, France
🚲 Ride
🖋 Charles Aubert
The Outlaws' Tavern
On the edge of Ariège, a closed brewery forces us to stop in a hamlet. Thinking of filling our water bottles before setting off again for the Montsegur pass, we enter a tavern and end up sampling beers brewed by the Outlaws for hours.